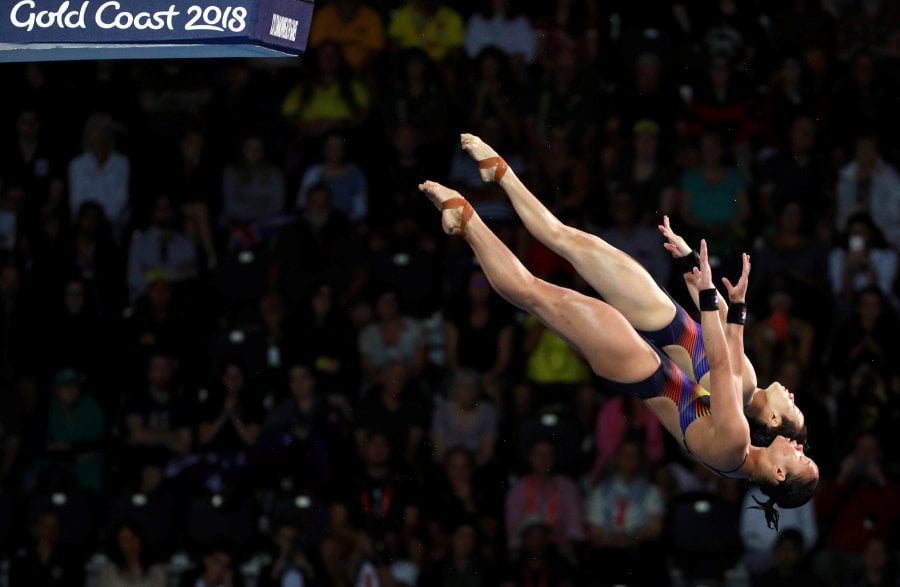 Jun Hoong-Pandelela, silver medalists at the 2016 Rio Olympics and bronze medalists at last year’s World Championships, mesmerised the judges with their world class dives as they earned 53.40, 70.20, 76.80, 74.88 for a five-dive total of 328.08 points. They led from start to finish.

For the record, it is Malaysia’s third Commonwealth Games title in diving after Pandelela (10m platform in 2010) and Ooi Tze Liang (men’s 3m springboard in 2014).

Compatriots Leong Mun Yee-Nur Dhabitah Sabri added up to their bronze from the afternoon’s 3m springboard synchro event by finishing third thanks to a high scoring final dive of 74.88 for a 308.16 total.

For Jun Hoong, it was a special day as the gold was also her first medal since making her Commonwealth Games debut in 2006.

“I feel happy and blessed. Thanks to my partner, I have finally won a Commonwealth Games medal. It is also the country’s first synchro title at the games,” said the Ipoh-born Jun Hoong.

“It was windy when we were on the platform but we kept our focus and translated what we had practice in training.”

Pandelela said they were uncertain over their performance as they did not do too well in training before the event.

“However, we managed to perform well. We only knew we would win after completing our final dive.

“In diving, things can go wrong and we kept our concentration on our final dive,” said Pandelela 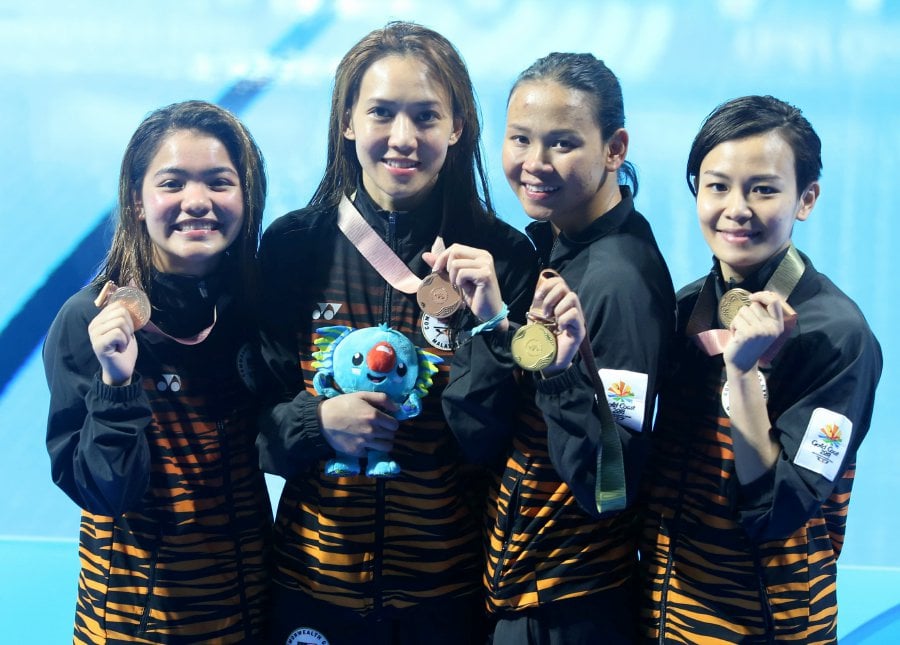 Mun Yee-Dhabitah felt the bronze they had won in the 3m synchro was tougher than the one they achieve in the 10m event.

“We were fourth going into our final dive in the 10m event. We promised ourselves to give our best shot on our dive and get a medal.

“The 3m synchro bronze, however, is worth more than the one from the 10m as it was more difficult for us,” said Nur Dhabitah, who only paired up with Mun Yee early this year.

Mun Yee said competing in two synchro events on the same day was taxing to her body.

“It was challenging as were here at 7.30am to train before the competition. We only returned to the Games’ Village for an hour for lunch before returning to the venue for the 10m event,” said Mun Yee.

Asked whether the Gold Coast outing, her fourth games, would be her last, the 34-year-old said: “Most likely, it will be my last. A great way to end it if it is my last.”

In the 3m synchro event, Mun Yee and Dhabitah were 61.40 points away from the gold medal but the latter miscued her entry in the pair’s final dive to finish with a 264.90 total.

However they couldn’t make the best of their chance and eventually settled for bronze with a score of 264.90 at the Optus Aquatic Centre on Wednesday.

It was certainly a waste as the pair were placed second heading into the fifth and final dive and needed a solid finish to stand on top of the podium.

But Dhabitah fumbled the entry on the last dive and they only scored 42.30 to drop down to third.

Despite the bronze medal finish, Mun Yee-Dhabitah were still pleased to finish with a medal.

“I never expected a medal in this event. It wasn’t a target for us because Canada and Australia are stron,” said 18-year-old Dhabitah.

“In the Diving World Series, they were the ones always on the podium. Yet somehow we finished with a medal despite our last dive so I’m quite thankful for that.”

The pair will return to the pool in the evening session where they will join Olympic silver medallists Pandelela Rinong-Cheong Jun Hoong in the 10m platform synchro event.

In the men’s 1m springboard preliminaries, the trio of Ooi Tze Liang, Ahmad Amsyar Azman and Mohd Syafiq Puteh all qualified for the top-12 final.

GOLD COAST: Pandelela Rinong-Cheong Jun Hoong lived up to their big reputations as they clinched gold in the women’s 10m platform synchro event at the Commonwealth Games.

The Olympic silver medallists and world championships bronze medallists led from start to finish as they scored 328.08 at the Optus Aquatic Centre on Wednesday.

It is Malaysia’s first ever gold medal from synchro at the Games.

The pair’s win was made even sweeter after teammates Leong Mun Yee-Nur Dhabitah Sabri delivered a huge final dive to pip Australia’s Teju Williamson-Melissa Wu to the bronze.

Mun Yee-Dhabitah who trailed in fourth after the first four dives, finished with 308.16, ahead of Williamson-Wu who had 307.80. Canada’s Meaghan Benfeito-Caeli McCay took the silver with 312.12.

With diving’s excellent one gold and two bronzes, Malaysia’s medal tally is now 3-3-5.

VETERAN diver Leong Mun Yee is happy that the spotlight is not on her.

But that has not stopped the 33-year-old from quietly hoping for a medal of her own in the 10m synchro event when the diving competition starts at the Optus Aquatic Centre today.

Mun Yee will team up with Nur Dhabitah Sabri but all eyes will be on Olympic silver medallists and World Championships bronze medallist Pandelela Rinong and Cheong Jun Hoong to deliver the goods.

Mun Yee, who is in her fourth Games appearance, believes she and her 18-year-old partner cannot be overlooked.

“Pandelela-Jun Hoong are the focus in the 10m synchro while Dhabitah and I are just the other pair,” mused Mun Yee.

“Its going to be a tough as all the divers are ranked in the top three.

“My partnership with Dhabitah is quite new and this is our first year diving together.

“But we are doing the same degree of difficulty as the others and are hoping for the best.”

“It’ll be a challenge because the weather here is cold, windy and hot at the same time,” said Mun Yee, who has only trained in 3m synchro for three months.

“I’m excited to get started but I’ll keep my focus,” she added.

The other Malaysians in action today are Ooi Tze Liang, Ahmad Amsyar Azman and Mohd Syafiq Puteh in the men’s 1m springboard individual.

SWIMMER Welson Sim (pic) wrapped up his campaign at the Commonwealth Games with a creditable showing.

“I’m just short off my personal best but that’s fine because I wasn’t really tapered for this event,” said Welson.

“Overall, it’s been a decent campaign and I know where I need to improve next, added Welson, who made the men’s 400m freestyle final last week.

That was a major achievement as Malaysia never had a swimmer in the final since Alex Lim Keng Liat’s feat in 2006 Melbourne Games.

Meanwhile, para swimmer Carmen Lim can walk tall after putting up a memorable Games debut when the 17-year-old clocked 35.95 in the heats to set a new Asean record in the women’s S8 50m freestyle.

The sweet one-armed girl however only managed 36.85 in the final for a fifth place.

“It felt good to break the record and I hoped to go faster in the final but I ran out of breath in the last 25m,” said Carmen.

“Still its a good showing in my first Commonwealth Games and I’m quite honoured to swim against the top five swimmers of my category,” said the Wales-based swimmer, who is looking to qualify for the Para Asian Games in Jakarta. 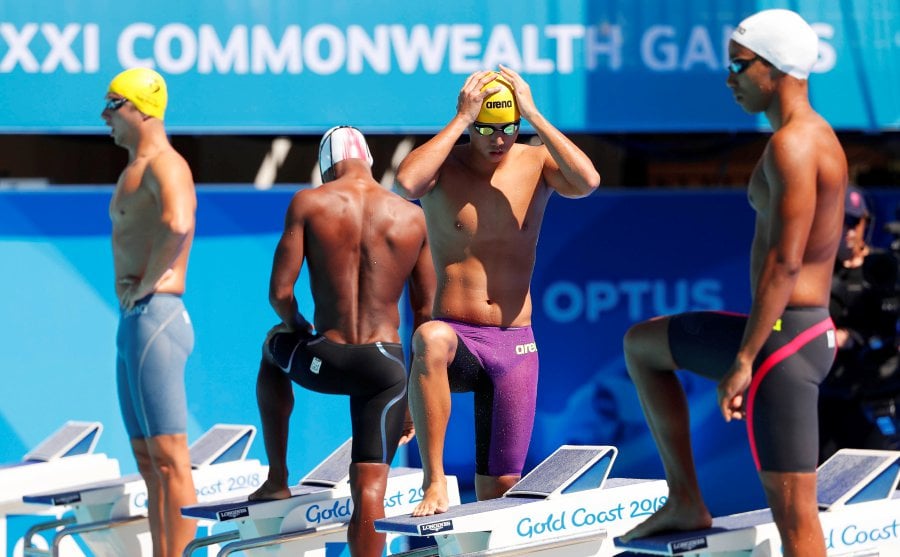 SWIMMER Tern Jian Han (pic) is setting his sights on new goals after ending his campaign at the Commonwealth Games with mixed reactions.

The 22-year-old is targeting to break two more of Alex Lim Keng Liat’s national records – the 100m and 200m backstroke – this year.

The Johor-born swimmer already took out one of Alex’s records – the 50m backstroke – when he clocked 25.60 in the semi-finals of the Commonwealth Games.

Unfortunately, Jian Han could not improve on his timing in the final.

He only managed a time of 25.96 to finish last out of eight swimmers in the final at the Optus Aquatic Centre yesterday.

“I was quite disappointed that I didn’t manage to improve on my timing but I’m happy to have made the final in the first place,” said Jian Han.

“I really couldn’t ask for more this time although I know where I need to improve on now.

“But with that said, I’m also setting new goals for myself this year. I want to break Alex’s two more records.

“Besides that, my goal is also to do well at the Asian Games.”

“Coach Paul Birmingham has already instructed us to start training for it once we return from the Commonwealth Games,” added Jian Han.

The 22-year-old met his own target by making the semi-finals of the 100m butterfly.

“I’m happy to make the semi-finals but I’m not really satisfied with the timing. It’s not a personal best,” said the Selangor-born swimmer.

“I trained to swim faster but I couldn’t make it. Now I need to go back and work harder because I still want to break the national record.”

Daniel Bego holds the 100m butterfly national record with a time of 53.33 set during the World Championships in 2009.

The 22-year-old clocked a time of 25.60 en route to finishing sixth in the semi-finals at the Commonwealth Games.

The time was good enough to erase Alex’s time of 25.67, which was recorded during the 2002 Manchester Games.

The superb effort also earned Jian Han a place in the final as he qualified as the fifth fastest swimmer.

He is the second Malaysian to make the final at this Games.

Welson Sim made the final in the 400m freestyle on Thursday but only finished seventh.