PETALING JAYA: A seven-gold rush helped Malaysia to finish as overall champions in the Asean Schools Games in Kuala Lumpur.

Golds from squash, badminton, volleyball and swimming on the final day of competition yesterday saw the host contingent finish on top with 37 golds, 34 silvers and 32 bronzes.

Indonesia, who had announced their intention to become overall champions on their arrival here, settled for second with 31-36-30. Malaysia ended undefeated in the boys’ and girls’ squash team events with wins over the Philippines (3-0) and Indonesia (3-0) respectively.

Malaysia also contested the boys’ and girls’ singles finals but lost both.

Swimmer Sebastian Soon clinched his third gold medal in as many days in the boys’ 1,500m freestyle. Sebastian, who set a new national record in the 400m individual event on Monday, came out tops in the 1,500m race in 16:09.87.

The boys’ volleyball team claimed the last gold for Malaysia by beating Indonesia 3-1 in the final.

“I’m happy to see very good performances in almost all the sports we took part in. Athletics, gymnastics and squash helped push us to the top spot.

“It is the third time we won the overall title,” said Malaysian head of contingent Zainal Abas, who is also the national athletics chief coach.

Malaysia were also overall champions when they hosted the Asean Schools Games in 2010 and they achieved the feat for the second time in the Philippines in 2014.

In athletics, Malaysia delivered 10-12-8 while making a clean sweep of all the six gold medals in rhythmic gymnastics.

Attached, please find the registration form for the said course which will be organised by ASUM with the assistance from FINA at Majlis Sukan Negara, Bukit Jalil.

Please forward the information to your affiliates. All applications must be submitted before the closing date (31st October, 2018) together with proof of payment to kongleeyan@yahoo.com

Submission MUST be accompanied by:
a. the completed REGISTRATION FORM
b. a copy of the ASUM/MSN Level 1 Swimming Coaching Certificate
c. payment transfer slip
to confirm your slot.

Participants are limited to the 1st paid 50 registration received.

***All applicants MUST possess the ASUM/MSN Level 1 Swimming Coaching Certification.

Attached, please find the Registration Form for the said course which will be organised by ASUM at Majlis Sukan Negara, Bukit Jalil (actual room will be informed later) from the 24-29 September 2018.

All application must be submitted before the closing date (31st August 2018) together with proof of payment to kongleeyan@yahoo.com

Applicants must have experience in diving as an athlete and/or coach.

Submission MUST be accompanied by the completed REGISTRATION FORM and payment transfer slip to confirm your slot.

Participants are limit to the 1st paid 50 registration received.

PETALING JAYA: Swimmer Welson Sim (pic) showed he is ready for a splashing time at the Asian Games in Indonesia in August following good results in the just concluded Mare Nostrum Series in Europe.

Sarawak-born Welson bagged two silver medals for Malaysia in the middle distance freestyle events in the final leg of the series in Monaco.

Welson posted 3:52.37 for his first silver medal in the men’s 400m freestyle final behind Norway’s Henrik Christiansen, who came out tops in 3:51.07.

Welson bagged a bronze medal in the 200m freestyle final in the second leg of the series in Barcelona, Spain two weeks ago.

The Malaysian swimmers did not take part in the first leg in Canet, France.

“Welson had some good racing against an extremely strong field as usual in the Mare Nostrum,” said swimming coach Paul Birmingham.

“These next six weeks of training will be crucial for him before we go to the Asian Games,”

Welson, a double gold medallist at the Kuala Lumpur SEA Games last year, was not the only Malaysian making an impact in the much competitive European swim meet.

Keith Lim did well to set a new national mark in the men’s 50m freestyle event in Monaco.

Keith clocked 23.10 to break the previous national mark of 23.17 in the short sprint race held by Alwyn Tan since 2015. Keith’s effort saw him ranked 13th overall.

PETALING JAYA: Pandelela Rinong (pic) made her way into the history books as Malaysia’s first individual medallist at the FINA Diving World Cup in Wuhan, China after a superb comeback in the women’s 10m platform individual competition.

The two-time Olympic medllist only managed to qualify for the semi-finals after finishing 12th in the preliminary round on Tuesday (June 5).

Pandelela continued with her steady display in the final held in the evening.

The two impressive efforts helped Pandelela to nail the bronze medal with her total of 349.15 points.

The Chinese duo were a class above the rest of the 12 finalists as reigning Olympic champion Ren Qian settled for silver with 403.85 points.

Pandelela has a bright chance to claim a second medal in Wuhan when she returns to the pool to partner Jun Hoong for the women’s 10m platform synchro event.

The duo are the reigning silver medallist from the 2016 Rio Olympics and gold medallist at the Gold Coast Commonwealth Games in April.

Attached please find the registration form for the said course which will be organised by ASUM at Hotel Seri Malaysia, Alor Setar, Kedah.

Please forward the information to your affiliates. All application must be submitted before the closing date (18th June 2018) together with proof of payment to cheepaokam@yahoo.com and rozy.asum@gmail.com

Submission MUST be accompanied by the completed REGISTRATION FORM and payment transfer slip to confirm your slot.

Participants are limit to the 1st paid 50 registration received.

Please note that the the above FINA Open Water Swimming School for Officials will
be held as follows:-

Participants who have passed a FINA OWS School and officiated at a required level will
receive a certification which will be valid for a 4-year period.

All intending participants must submit the attached registration form by 15 June 2018 via email to yewsiangsoh@yahoo.com and kongleeyan@yahoo.com together with a scanned
copy of passport and passport photo.

Submission MUST be accompanied by the REGISTRATION FORM, Copy of PASSPORT and Passport Size Photograph (All in JPeg format)

Participants are limit to the 1st paid 80 registration received. 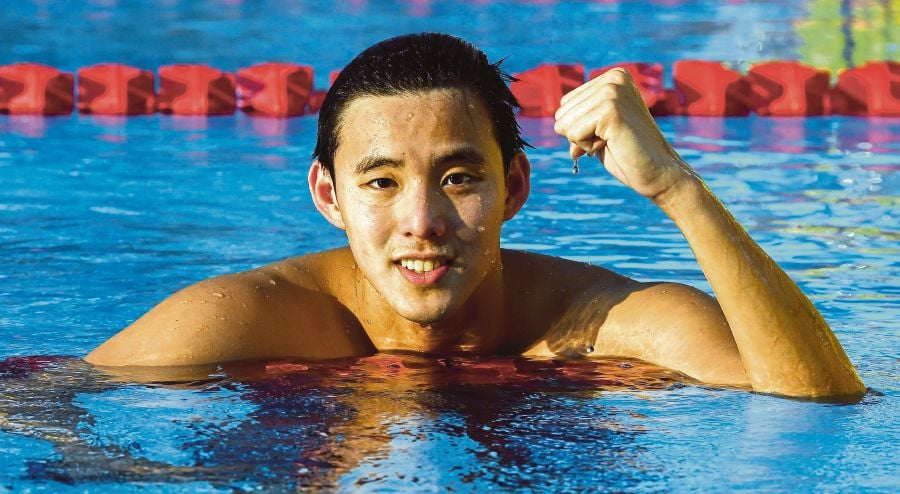 KUALA LUMPUR: A shoulder injury did not stop swimmer Welson Sim from winning his third gold medal on the final day of the Malaysian Open in Bukit Jalil on Sunday.

It is a mediocre time considering that Welson had clocked his personal best of 15:28.00 in March.

“I did not push myself as I did not want to aggravate my shoulder problem,” said Welson.